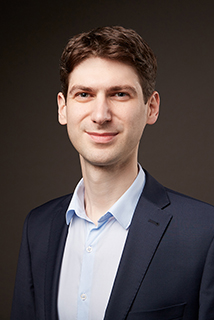 This is a guest post by my co-author Natalie Stors, which also appeared on her blog. 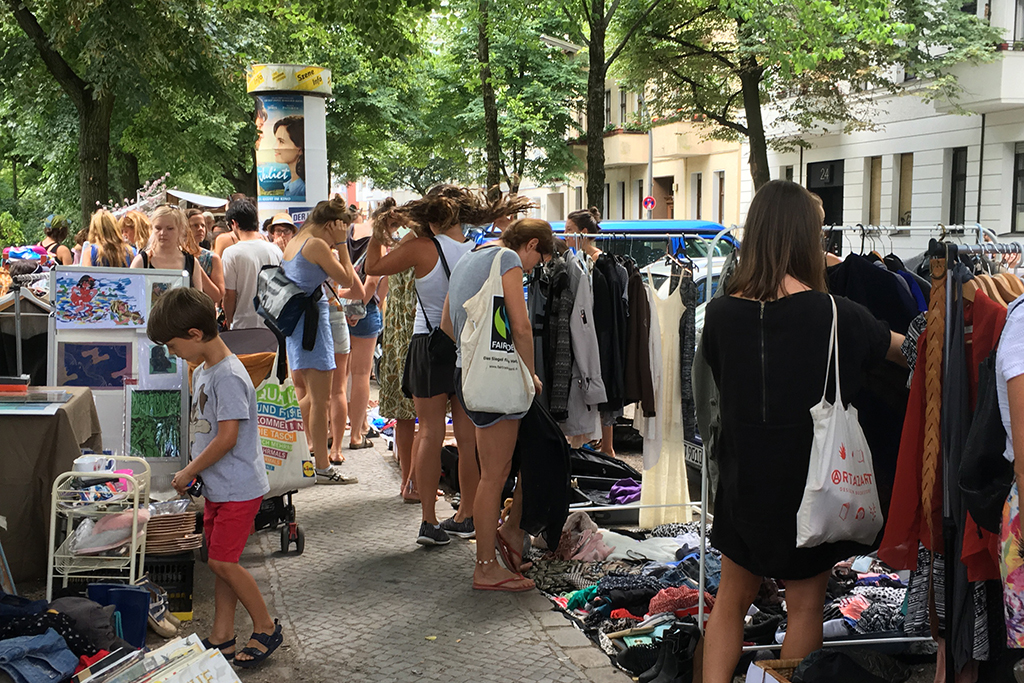 TL;DR: Traditionally, urban tourism space is understood as a fixed, spatial entity. We follow a constructionist approach and argue that urban tourism space is also (re-)produced digitally and collaboratively on online platforms such as Airbnb. We relate our work to a CSCW research direction that is concerned with the role of digital technologies in the production and appropriation of urban space and use the concept of representations as a theoretical lens for our empirical study, in which we qualitatively analyzed how the two Berlin neighborhoods Kreuzkölln and City West are digitally constructed by Airbnb hosts in their listing descriptions. We also quantitatively investigated to what extend mentioned places differ between Airbnb hosts and visitBerlin, the city’s destination management organization (DMO). In the traditional urban tourism hotspot City West, hosts referred to many places also mentioned by the DMO. In the neighborhood of Kreuzkölln, in contrast, hosts reframed everyday places such as parks or an immigrant food market as the must sees in the area. We discuss how Airbnb hosts contribute to the discursive production of urban neighborhoods and thus co-produce them as tourist destinations.

Airbnb, the largest digital peer-to-peer distribution platform for accommodations, operates in about 81,000 cities in 191 countries, offering 4.5 million rooms, apartments, houses, and other types of accommodation. The widespread adoption of Airbnb led to changes in urban life and in particular urban tourism. Visitors of urban destinations increasingly leave inner-city areas that are close to major sights and tourism-related facilities, and venture into residential neighborhoods—a phenomenon known as off the beaten track or new urban tourism. Short-term rentals enable all kinds of temporary city-users to stay in private apartments. However, only a fraction of urban residents participates in the practice of renting out rooms or apartments. Some of them are annoyed by the large influx of visitors to their neighborhood and the consequences for the urban structure resulting from large-scale short term rentals. The impact of the fast-growing number of Airbnb listings, particularly in residential neighborhoods, has been controversially discussed in many cities around the world. In order to fully understand the Airbnb phenomenon and its consequences for the city, it is important to consider both the tourist and the host perspective. Tourists and their spatial practices have already been considered in academic research from urban geography and the CSCW research community. Local communities, in contrast, have long been neglected in urban tourism research. They were mainly described as suffering from urban transformation processes, rent increase, and gentrification. Some researchers pointed to the significance of local people in the co-construction of urban tourism space and atmospheres and Airbnb hosts are increasingly gaining attention in this context. What has so far rarely been taken into account, however, is hosts’ potential to contribute to the discursive and performative reframing of residential neighborhoods into urban tourism areas, which is the focus of our work. In the CSCW community, the concept of place has been widely adapted to inform location-based technologies, whereas implications of a “discursive place shaping” on online platforms have not been considered yet. With our research, we try to fill this gap. Our overarching goal is to investigate:

How are online platforms engaging in the co-production of (new) urban tourism space?

In particular, we are interested in how the peer-to-peer accommodation platform Airbnb contributes to shaping tourist places in the city. In our paper, we embed this research direction in varying conceptualizations of space and place as applied in the CSCW and tourism geography research communities, and discuss the common ground between their research perspectives. We identify that container-like understandings of urban tourism space, as represented in the tourist-historic city model, resemble the traditional framing of space as a “natural fact” in the CSCW community. Both approaches, however, are lacking satisfying explanations of how tourism space can emerge and develop in residential neighborhoods. The tourist-historic city model solely takes into account tourism-related facilities and infrastructure as defining elements of tourism space. Such structures are often non-existing in new urban tourism areas like Kreuzkölln, one of our case-study neighborhoods. Still, this neighborhood without any major sights is becoming a tourism hotspot. Against this background, we follow a constructionist understanding of urban tourism space. We argue that tourism space, like tourist sights, is socially constructed through representations and performances. That means we no longer regard tourism facilities and infrastructure as the central elements defining tourism space. Instead, people are the major agents who transform places and landscapes into tourist destinations. They attach meanings and values to places and objects, produce written, oral, or pictorial representations of them, and thus contribute to the discourse of how places or objects are to be perceived. The following figure visualizes our conceptual approach: 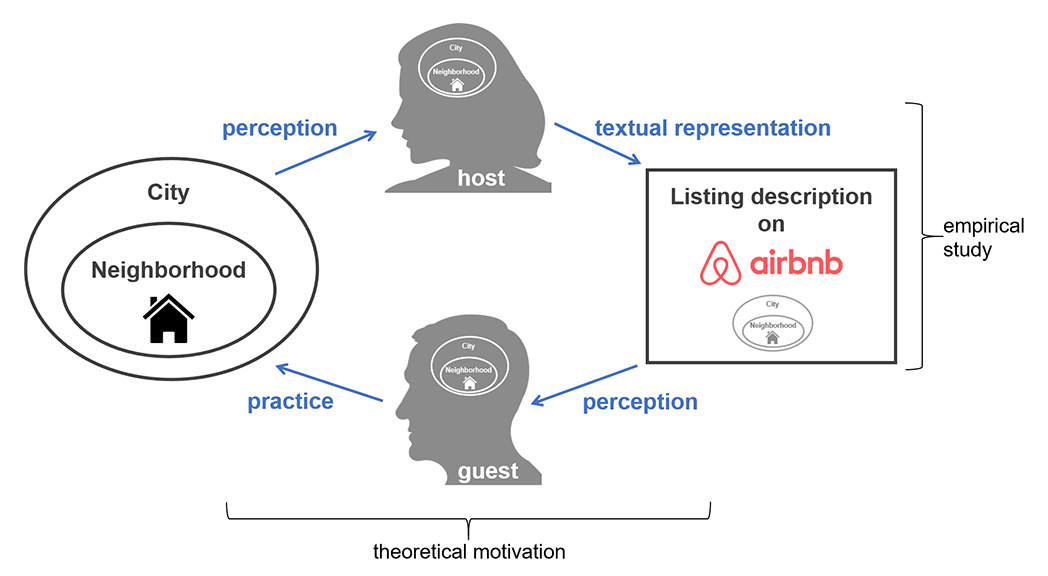 Finally, following the performative turn in tourism studies, we argue that places need to be enacted through “bodily performances.” Taking these theoretical considerations into account, we analyze how two different Berlin neighborhoods, Kreuzkölln and City West, are socially constructed in Airbnb listings.

As motivated above, our goal was to analyze and compare how the two neighborhoods Kreuzkölln and City West are constructed as tourism spaces in Airbnb listing descriptions. For our analysis, we deliberately chose two very different neighborhoods. The neighborhood we denote City West has a long tradition of being touristically significant. It contains internationally known iconic sights that are visited by a large number of people every year. Therefore, we consider this neighborhood to be a traditional urban tourism hotspot. The neighborhood we denote Kreuzkölln, in contrast, had a rather difficult past. It has long been associated with poverty, crime, and drugs, although its image is changing now. The neighborhood itself is lacking major sights, but the borough provides some facilities that are being promoted by Berlin’s DMO. Nevertheless, Kreuzkölln increasingly attracts tourists, which is why we consider the neighborhood to be a new urban tourism hotspot.
Our units of observation are the free text fields of the Airbnb listings located in those neighborhoods. This includes the listings’ title, description, and house rules. Our units of analysis are the hosts’ descriptions of the city and the neighborhoods (outside)—the descriptions of the apartments (inside) are not in the focus of our research. To delineate the two neighborhoods, we rely on the so-called Lebensweltlich Orientierte Räume (LOR). These urban planning areas have been introduced by the Berlin administration for urban development and housing in the year 2006. The following figure visualizes the location of the two neighborhoods in Berlin, together with the Airbnb listing density: 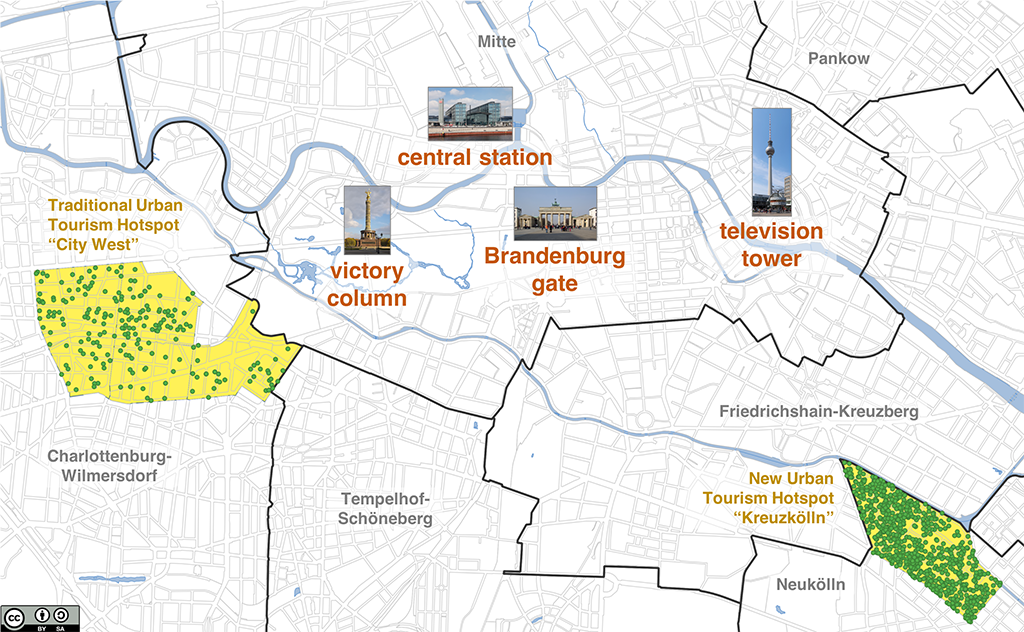 The last step of our research was to compare hosts’ neighborhood descriptions with the descriptions of visitBerlin, the city’s DMO. To this end, we extracted all places that visitBerlin mentions in the corresponding borough descriptions on their website.

In our case study, we found that the types of places and sights described greatly differ between the two neighborhoods Kreuzkölln and City West. While Kreuzkölln hosts mainly reframed everyday places to be worth visiting, City West hosts primarily focused on well-known sights that were likewise promoted by the DMO. In the neighborhood of Kreuzkölln, the places and facilities described to be worth visiting originally served the needs of local residents. A canal bordering Neukölln (“Landwehrkanal”) and a weekly food market were marked as the areas’ highlights. These facilities, however, do rarely attract visitors due to their physical appearance alone: 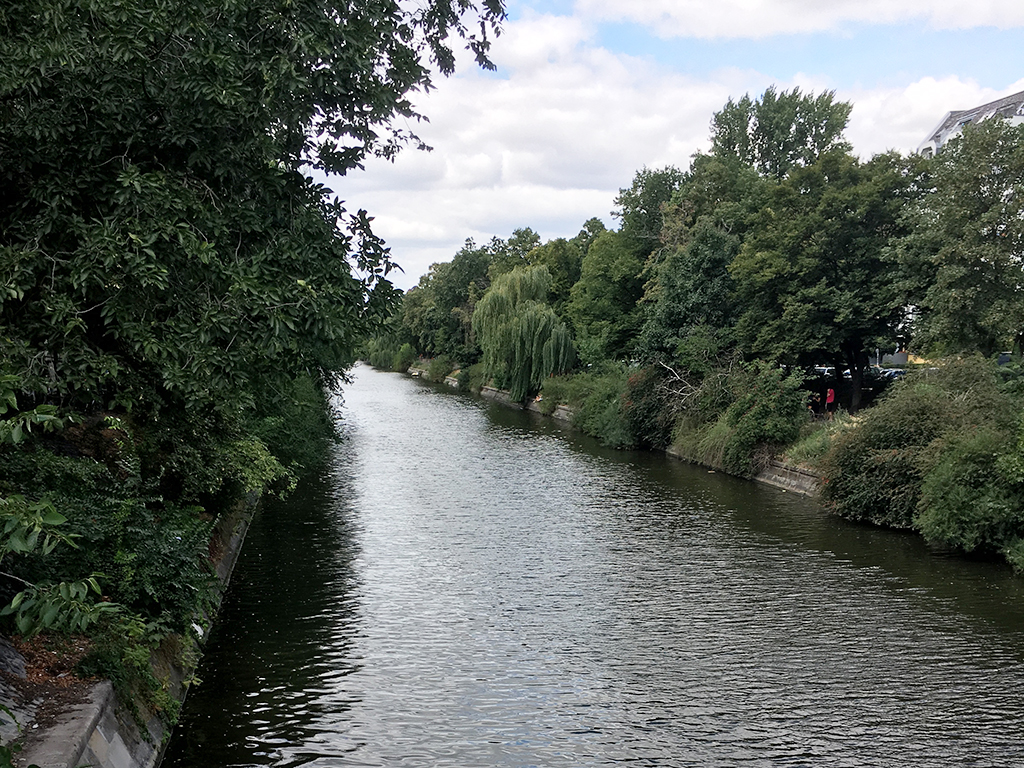 Instead, Airbnb hosts convey specific meanings to these places. In their neighborhood descriptions, hosts signify Landwehrkanal as a beautiful place to spend a typical Berlin summer night and describe the food market as an exotic place. Hosts encourage their guests to buy typical food in order to experience the neighborhoods’ multicultural atmosphere. As a result of these neighborhood descriptions, certain space images are collaboratively constructed and (re-)produced by Airbnb hosts. In the case of Kreuzkölln, a residential area and its prevalent local infrastructure is reinterpreted as a touristic place. The second neighborhood City West, in contrast, provides facilities that are generally understood as sights or attractions. In their listing descriptions, hosts focused primarily on sights in close proximity to their room or apartment. Iconic architecture that is located further away, such as Brandenburg Gate or Reichstag, was rarely mentioned. Airbnb hosts in City West steered visitors’ attention mainly to Kurfürstendamm, a large street that they signified as a shopping paradise, and to Savignyplatz, which they described as a historic square full of restaurants. Hosts primarily encouraged the practices of shopping and eating out, which they directly related to the prevalent infrastructure. They do not need to reinterpret the area, as in the case of Kreuzkölln, to mark it as attractive for visitors. Instead they derive its attractiveness from the neighborhood’s past. They refer to the famous Kurfürstendamm and to KaDeWe, one of the largest and oldest department stores in Europe, founded in 1907: 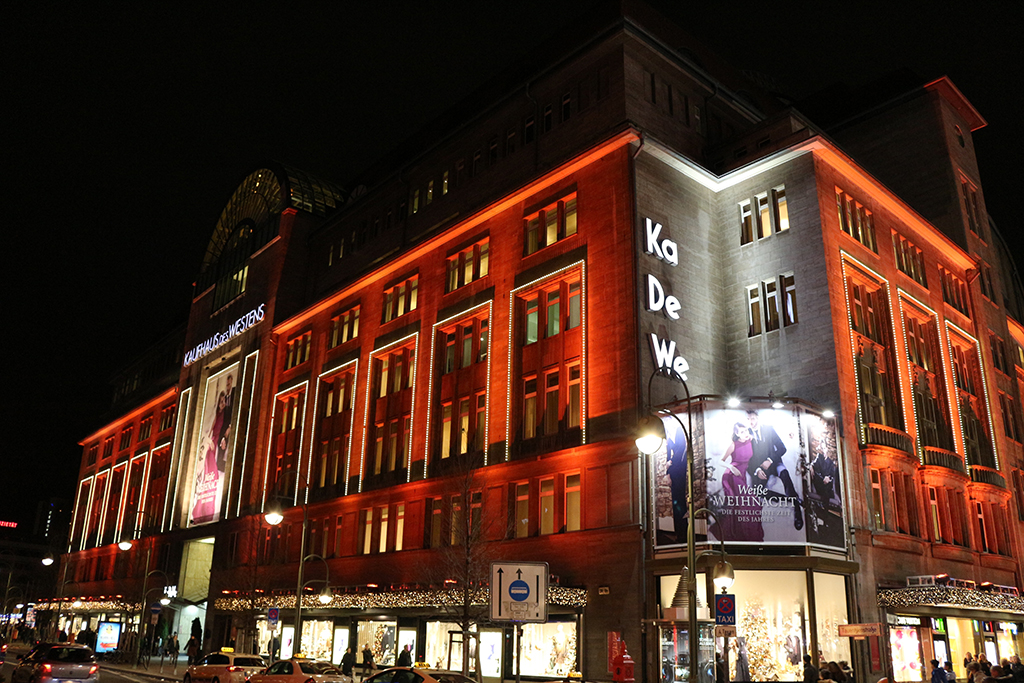 Hence, City West hosts reproduce long-established images and practices of their neighborhood in their listing descriptions. In both cases, the analyzed neighborhoods are signified by hosts as places worth visiting. While Kreuzkölln hosts reinterpret everyday facilities, City West hosts reproduce existing space images. Hence, hosts in both neighborhoods contribute to the perception of their neighborhoods through reinterpreting or reproducing space images—they construct them as tourist places. Our quantitative analysis revealed that the overlap between the DMO’s borough descriptions and hosts’ neighborhood descriptions is larger in the traditional urban tourism hotspot City West compared to the new urban tourism hotspot Kreuzkölln. In both districts, the DMO mainly focused on classic, material sights. Many of the places located in Charlottenburg-Wilmersdorf, where City West is located, were also mentioned by Airbnb hosts in that neighborhood. In contrast, none of the DMO’s favorite places in the borough Neukölln were mentioned by Kreuzkölln hosts. Those hosts instead focused on local infrastructure and everyday places such as the Landwehrkanal and the markets, which the DMO did not consider to be noteworthy.

In summary, our findings show how space images are collaboratively constructed in Airbnb listings and how they differ between the analyzed neighborhoods. We found that Airbnb hosts in traditional tourist hotspots rather reproduce existing place images, which have previously been co-produced by the city’s DMO. In contrast, hosts in new urban tourism hotspots tend to reinterpret everyday places and endow them with new meanings, but such places are often not regarded as being significant for visitors by the DMO. The new urban tourism hotspot Kreuzkölln, for example, seems to provide a variety of attractions according to Airbnb hosts, but is not promoted as a touristic place by Berlin’s DMO. Since the DMO seems to focus on material sights in general, they are unlikely to promote residential areas that are lacking such infrastructure. On peer-to-peer platforms like Airbnb, in contrast, everyday places gain importance and are marketed. We thus hypothesize that digital information sharing platforms are more important in the production of new urban tourism areas than the city’s DMO. Our finding that, through digital representations of space in Airbnb listing descriptions, mundane places can gain significance for visitors and thus transform into tourist places, is an important contribution, because previous research mainly focused on spatial representations and destination images produced by the city’s DMO or other governmental representatives. We, in contrast, have illustrated how space images can likewise be produced and reframed collaboratively on online platforms such as Airbnb. Against this background, we argue that the power to endow space with new meanings is nowadays more evenly distributed among actors. The DMO or the tourism industry in general are no longer the only ones pre-interpreting tourism space. By the means of digital technologies and online platforms, local people can likewise contribute to the framing of places.

A more detailed description of our research design and results can be found in our research paper. If you have any further questions, do not hesitate to contact Natalie Stors.